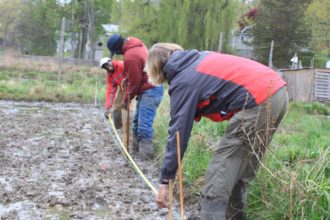 Dawn Hoyte and Nfamara Badjie of Ever-Growing Family Farm in Ulster Park, NY received a Farmer Grant to evaluate nursery methods for rice production. Transplants are critical to growing this crop successfully in our region, given the short growing season. Past Farmer Grant research has shown that using a plug-tray nursery method was successful.

Badjie, originally from Gambia, wanted to compare the plug-tray method to the Diolla-style field nursery method, with which he was familiar, where field nurseries are constructed as raised beds next to rice paddies.

With guidance from their technical advisor, Erika Styger of Cornell University, the team–which included Badjie, his cousin, Moustapha Diedhiou, and son, Malick–established a randomized block experimental design to look at sowing and transplanting timing for both nursery methods using two rice varieties. They found that, on their farm, the Diolla method resulted in more robust seedlings and required less transplanting time. They were also able to extend the window to transplant and shorten the production cycle by using the Diolla-style nursery bed.