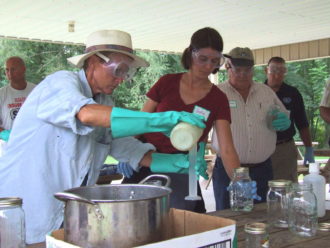 In Thurmont, Md., farmer Charlie Kolb produced about 5,000 gallons of biodiesel in 2009, and he is teaching a neighbor how to do the same. Sebastian Kretschmer makes biodiesel at a nonprofit farm in Kimberton, Penn., where he holds biodiesel production demonstrations for visitors. Staff at Greensgrow Farm in Philadelphia save thousands each year by producing up to 200 gallons of biodiesel per week, and they serve as an important biodiesel resource for other area farmers.

Kolb, Kretschmer and the Greensgrow Farm staff are three examples of farmers who, after participating in a SARE-funded workshop series at Wilson College in Chambersburg, Penn., learned how to generate clean energy, reduce their dependence on fossil fuels, and play the role of biodiesel mentor to their peers.

The regional workshop series, begun in 2006 and attended by about 100 farmers, included hands-on demonstrations of how to set up and operate small-scale biodiesel operations, with an emphasis on personal and environmental safety. Project organizers then provided mini-grants of $1,500 to 10 farmers to help them establish their own on-farm production using recycled vegetable oil.

From the time the SARE grant began in 2006, until 2009, participating farmers produced a combined 11,000 gallons of biodiesel—worth about $44,000—and had developed the on-farm capacity to produce up to 1,700 gallons each week. Along with making their own biodiesel, farmers were encouraged to help others with alternative fuel. “We wanted to train farmers to be regional ambassadors for biodiesel,” says Matt Steiman, who coordinated the program as then-farm manager of Wilson College’s Fulton Center for Sustainable Living.

By using biodiesel in their farm equipment and delivery truck, Greensgrow—a nonprofit farm in urban Philadelphia— saves up to $200 per week in fuel costs and earns about $50 per week by giving leftover biodiesel to a local co-op, says Ryan Kuck, Greensgrow’s sustainability coordinator.

Kolb became interested in the Wilson College program because, after conducting some Internet research on biodiesel production, he felt he needed to see it done in order to do it himself. “Once I went through the program and got an overview of what I was trying to accomplish, it was a lot easier for me to duplicate that,” says Kolb, who has almost eliminated conventional diesel from his 140-acre farm.

It costs Kolb about $2 to make a gallon of biodiesel, and he invested nearly $20,000 in his high-capacity, high-efficiency equipment. He expects his operation to become profitable in the future after he recoups his initial investment. Meanwhile, he is happy to be energy independent.

Because on-farm biodiesel production is a small-scale industrial process, the Wilson College program showed farmers how to handle the ingredients and byproducts safely. Steiman, now at Dickinson College in Pennsylvania, and others are researching effective ways of extracting methanol from the glycerol byproduct and using what remains as an on-farm compost.