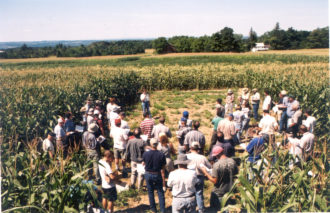 John Maxwell, a Geneseo, N.Y., dairy farmer, used to apply more than 60 pounds of phosphorus per acre when planting his 250 acres of corn. But after participating in a SARE-funded, statewide research project aimed at helping growers fine-tune their use of starter phosphorus fertilizers, he has reduced that to about 20 pounds per acre, allowing him to save $5,000 per year.

“We have continued the lower rates and are not seeing any yield loss,” Maxwell told the Cornell University researchers and educators who led the multi-year project.

Maxwell is one of hundreds of corn growers across New York who together slashed their use of phosphorus-based fertilizers by tens of millions of pounds from 2000 to 2006 without losing anything in yields, a move that allowed them to save a staggering $30 million. These huge savings— which have significant environmental and economic implications—occurred in large part because of the Cornell project, which drew on a broad spectrum of collaborators and included dozens of trials on farms like Maxwell’s.

The research started in 2000 and eventually included 65 on-farm and 13 research-station trials conducted through 2003. Ultimately, researchers used the trials to demonstrate that growers could get customary yields with little or no phosphorus applications when planting corn in soil that already tests high for the nutrient. In some cases, like Maxwell’s, that meant going from seasonal applications of 50 or 70 pounds of phosphorus per acre to 25 pounds or less, the rate that experts recommend. When growers used manure and had phosphorus-rich soil, no additional phosphorus was needed, researchers found.

The project yielded such convincing data and involved such a large number of stakeholders—including growers, consultants, educators and scientists—that it led almost instantly to widespread changes in behavior. From 2000 to 2006, the most recent years that data is available, growers cut their use of phosphorus by a total 165 million pounds from previous years.

“It was basically a wave going through the state of the message that you don’t need that much phosphorus for these fields. A lot of farmers caught on to this. A lot of people started shifting to either low phosphorus or phosphorus-free fertilizers for corn, and fertilizer dealers joined in by offering lower phosphorus blends,” says Quirine Ketterings, associate professor of nutrient management at Cornell University and the project’s lead organizer.

While Cornell nutrient management specialists had long recommended that farmers lower their use of phosphorus fertilizers, they launched this project because they were lacking strong test results to support their recommendations. Also, with New York’s livestock operations facing new regulations, it was important to find effective ways of reducing on-farm nutrient levels. Through the project, “we acquired statistically robust information and, more importantly, helped farmers to have the confidence to adopt the practice, and these farmers convinced others to try,” says Karl Czymmek, a project leader and nutrient management educator with Cornell’s PRO-DAIRY program.