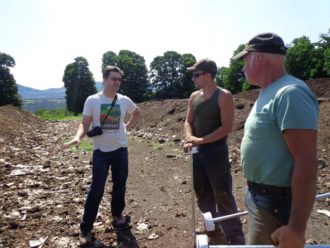 Eric Paris of Tamarlane Farm, a dairy in northeastern Vermont, has been closing the loop on his farm by composting farm waste and community food scraps (about 12 tons per week) to create a valuable fertility source for his farm fields.

His Farmer Grant project sought to determine whether a low-cost Aerated Static Pile (ASP) system would improve the efficiency of the farm’s composting program as compared to the typical composting method he was using where windrows are repeatedly turned by tractor. Paris was specifically interested in learning if an ASP system--which uses a fan and ductwork to force air into the piles without turning them--would reduce composting time, space needs, and labor hours.

Through this research, Paris found that the ASP system trialed was able to achieve temperature requirements (as defined by the National Organic Program) for the compost material in 3 days (versus 15 days with the turned windrow system). The system used only about one-third of the space needed for the turned windrow method.

Labor savings were inconclusive; in fact, Paris noted that the ASP system’s aeration schedule must be monitored more frequently and adjusted to prevent the piles from overheating or drying out. However, he believed that with more experimentation, the ASP system would be a labor saver.

Further, in comparing ASP systems available, the system they trialed cost about $1,000 in materials, making this an affordable option for his composting operation as well as for other farms of a similar scale to Tamarlane Farm.