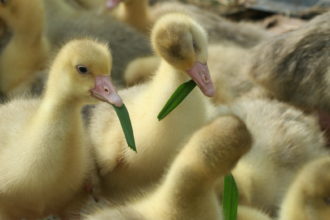 He divided the goose flock into three groups of approximately 60 each and supplemented one group with free-choice grain, one group with two feedings per day, and the final group with one feeding per day. By tracking time, material, and energy inputs, he could compare his production efficiency for each group, and he also concluded the trial with a blind tasting of the experimental groups.

Results indicated that, in a long-season production cycle (greater than 20 weeks), limiting grain feed to twice a day for five minutes each time produced a satisfactory carcass weight (10.45 lbs) and a relatively low feed conversion ratio (4.06), plus a robust texture and taste.

Limiting grain feed to once per day resulted in a very similar cost of production, but a less desirable texture and flavor (9.5 lbs, 3.10 feed conversion ratio).

Allowing free-choice access to grain yielded a satisfactory carcass weight (10.89 lbs) and flavor, but the cost of production was much higher due to higher feed conversion ratio (4.96).

Wesley also identified several new directions for future exploration, such as ideas for reducing production costs through more efficient chores and processing labor. The data also suggest a 12- or 18-week processing time frame to reduce labor and the cost of production. For example, processing at 12 weeks works best with free-choice grain and pasture, while an 18-week processing might work best with limiting grain twice a day and pasture.