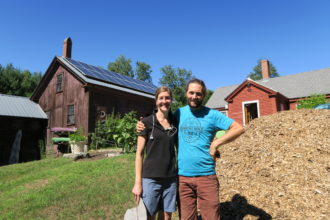 How do small-scale farmers in rural and urban locations farm successfully on marginal soils? Jennifer Wilhelm of Fat Peach Farm in Madbury, NH conducted a Farmer Grant project to find out.

Wilhelm had established no-till permanent raised beds on her one-acre mixed vegetable operation and her project investigated weed suppression, soil health and production potential of this system. With help from her technical advisor, Richard Smith of the University of New Hampshire, Wilhelm conducted a weed bank study and discovered that the farm had high weed diversity, but low abundance. She also monitored time spent weeding and calculated that about 3% of total farm time was spent weeding, averaging $547.50/farm laborer/season.

To assess soil health, she used the Cornell Soil Health Assessment and determined that first year plantings did not perform well due to woodchips robbing nitrogen from the soil. The soil health data showed that overall physical, biological, and chemical factors of the test plots were in optimal condition; the beds had high organic matter which suggested that the system may effectively prevent run-off and increase water holding capacity. However, high levels of phosphorus were found in both years of her study, indicating a need to change the farm's fertility management practices.

Wilhelm also looked at production potential of this system and did not find significant difference in yields between plots; she concluded that after the plots were established, permanent raised beds can produce consistent yields. The research confirmed for Wilhelm that no-till permanent raised beds are a viable system for small-scale growers.