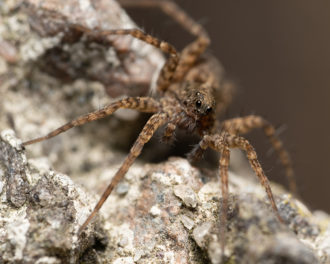 Spiders were the focus of a Northeast SARE Graduate Student Research Grant project conducted by University of Maryland student Dylan Kutz. Kutz was interested in studying these undervalued yet important sources of natural insect control. He said, “Spiders are the most abundant natural enemy that occur in most agroecosystems and are estimated to globally consume around 3 trillion prey items in croplands each year.”

Kutz was particularly interested in the movement of spiders from drainage ditches into neighboring soybean fields. Because ditches are generally less disturbed than the croplands they border, Kutz suggested they may provide habitats for spiders throughout the growing season and thereby support important conservation biological control for farms. Therefore, his project sought to understand the kinds and abundance of spiders living in drainage ditches and the extent to which they colonize nearby farmland from these ditches.

Kutz conducted his research in three drainage ditches and surrounding soybean fields on an organic farm on Maryland’s Eastern Shore. To learn what spider communities live in ditches throughout the growing season, he used pitfall traps and foliar sweeping to collect arthropod samples at four different times during the growing season. Samples were collected both in the ditches themselves as well as at the edges between the ditches and soybean fields. All collected spiders were identified and counted as were insects to determine food sources for the spiders.

To assess the movement of spiders from the drainage ditches to neighboring fields, Kutz collected spider and insect samples four times during the season (at different phases of soybean growth) in four locations: in the ditch, at the ditch’s edge and 10 and 20 meters into the soybean rows. He also recorded characteristics that describe ditch habitat like its size, presence of moving water, and the types and density of plants living in the ditch.

He discovered that some spider species (like Rabidosa rabida, Schizacosa avida, and Hogna frondicola) were found only in drainage ditches throughout the entire growing season. Most spiders, however, were observed in the ditch and also in the soybean field at some point during the summer, indicating that many do move from ditch to field during the growing season. For example, Pardosa milvina were found at all study locations throughout the entirety of the season. On the other hand, Sitticus concolor and Zygoballus rufipes seemed to travel into fields as the season progressed—they were observed only in the ditch during the first two sampling periods but were found in the soybean field during the latter two sampling periods.

His research revealed that the number of spiders and abundance of their insect prey had a positive relationship both in the drainage ditches and soybean fields. As the number of insect prey increased in the field, so too did the abundance of spiders. Kutz also found that plant diversity in the ditch had an indirect influence on spider abundance. As plant diversity in the ditch decreased over the course of the growing season, insect prey decreased and, therefore, spiders living in drainage ditches decreased too.

Kutz said Northeast SARE helped contribute to the success of his research. “The SARE Graduate Student Grant made all the difference in what I was able to accomplish during my master's research. I was able to sample more drainage ditches and [had] more hands to help during my field days with the funding provided to me. The quality of my master's research was greatly improved by the grant's assistance!”